Barriers to Re-entry: the Racial Exclusion of Japanese Americans in Postwar Portland 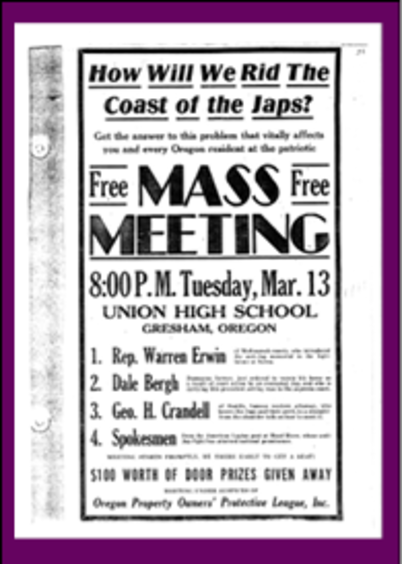 Barriers to Re-entry: the Racial Exclusion of Japanese Americans in Postwar Portland

RSVP at https://forms.gle/R6wzk26z1X9AMUx68
to get Zoom link the day before the lecture

In the final months of World War II, Japanese Americans faced the daunting prospect of returning to a mostly hostile Portland. Determined exclusionists sought to bar their return and preserve white supremacy in the farm and business sectors in which the immigrant community made their livelihoods before the war. Japanese American efforts between 1945 and 1950 to reclaim their social and economic place in Portland illuminate the city’s fraught history of racial and progressive politics that still linger today. This presentation will focus in particular on Japanese American collaboration with other minority groups to combat racial prejudice and campaigns to regain rights to property ownership.

Dr. Robert Hegwood is an independent scholar of Japanese and Japanese American history. He graduated from Portland State University with Bachelor’s and Master’s degrees in History, and completed his Ph.D. in Modern Japanese History at the University of Pennsylvania in 2018. In 2018-2019 Dr. Hegwood was a postdoctoral fellow at the Harvard University Reischauer Institute for Japanese Studies. His research centers on issues of race and material culture in Japanese and American society. He is currently completing his manuscript on the role of Japanese Americans in the construction of Japan’s overseas trade networks and global identity.